Our garden has been treating us quite well this season!  In addition to LOTS of lettuce, we’ve been harvesting garlic scapes, chard and a bit of purple kale.  This melage was used in this white bean salad of sorts.  Heated up some olive oil, added a sliced shallot, added chopped garlic scapes and cooked for a few.  I then added the chopped up greens and until they wilted and added a little more than a cup of white beans and a handful of dried cranberries.  Salt and pepper to taste and then some toasted almonds thrown in for good measure.  Delicious on its own or over a whole grain or lettuce.

Lemongrass Rice (among other things)

In continuation of our “what to eat” series, dinner tonight was lemongrass rice with spiced lentils and onions paired with some pita and sour-cream with lemon and basil sauce and a wilted Chinese spinach and tomato salad.

We have some lemongrass growing in the garden, so I simply washed it, tied it in a knot and added it to the brown rice in the rice cooker.  For the “sauce”, I whisked together some sour-cream, lemon juice and minced basil (also from the garden) and let it chill in the fridge.  I cooked one minced onion with a bit of olive oil and broth until wilted and then added the lentils and a lot of veggie broth until they were cooked.

For the spinach and tomato salad, I washed and chopped the spinach and microwaved it for a minute.  Drained it and added chopped tomatoes, salt and lemon juice with a tiny bit of truffle oil.  Voila, awesome dinner. 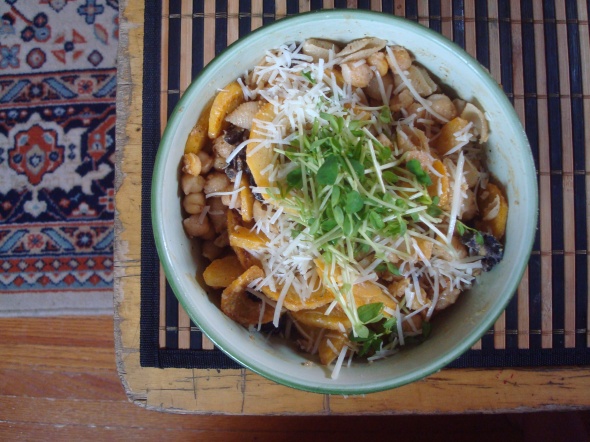 As weather in New York City remains in the sweaty armpit zone, we continue to eat as much not-hot food as possible. For this dish, we had to sautee the squash rounds in some olive oil for a bit, but after that we mixed the rest of the ingredients cool – oricchiette and chickpeas (both leftover from other recipes) chopped black olives, plus some lemon juice, tahini, and salt for dressing – and served the salad just above room temperature, topped with grated cheese and pea shoots.

BTW, it all started with the following squash (L) which seems to have put our niece (R) on edge: 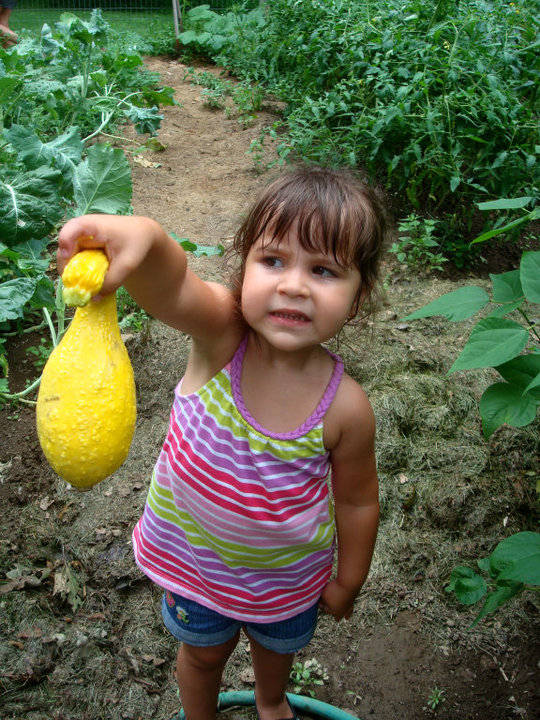 We had some friends over to dinner last night and utilized some fresh picked cabbage leaves from the garden for these puppies. We layered thinly sliced red pepper and queso fresco inside the leaves along with a healthy dollop of white bean and veggie puree (recipe below). We were a little worried about serving the cabbage leaves raw, thinking they might be too bitter, too tough, or both. But they were actually perfect – a littly spicy and not tough but rather…snappy.

1. Throw all this stuff in a food processor and blend throroughly.

I should also note that a bit of spending was required for this party. I bought the 2 red peppers and the queso fresco seen above, as well as some chevre and some limes. Fairly pricey stuff, especially because it was purchased at our local supermarket – I think about $9. We’ll have to figure out how to fit this (at least partially) into last weeks budget or this weeks. 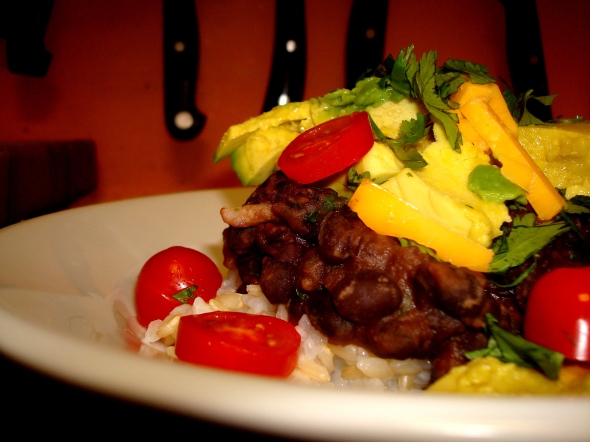 We had an avocado from last week that sorely needed eating, so I whipped up some black beans (already cooked and in the fridge) with chili powder, sauteed with half a chopped onion and some minced garlic.  The beans were placed over a bed of rice and sprinkled with cilantro, cherry tomatoes, some cheese and, of course, slices of avocado.  Extremely flavorful and filling, especially served with some cornbread.

This week’s receipt will be posted tomorrow!

For dinner last night I threw together an impromptu navy bean dish that turned out quite well. Having pre-cooked the beans in the pressure cooker, the method here was basically like a chili, but a totally different set of flavors. We served it over brown rice with some cornbread on the side.

1. In a pot, sautee the garlic and onion in olive oil until the onion is translucent.
2. Add chopped chard stems, along with the crushed red pepper, a dash of salt, some pepper, some lemon juice (a glug or so) and ginger. Let it cook for a few minutes until the stems begin to soften.
3. Add the chard leaves and the beans, stir, and cover. Check after a couple of minutes and if the chard hasn’t released enough water to have a finger (as in “a finger of whiskey”) or so of liquid at the bottom of the pot, add some water.
4. When the chard leaves are tender enough for your liking, serve over rice. Add a squirt of sriracha if you like it spicier.

Threw together a pretty quick dinner tonight, but it involved a couple of experiments that worked really well. First of all, we had some cooked blacked eyed peas in the fridge that Tina threw in the pressure cooker a couple days ago. I decided to use those to make some pseudo-refried beans that didn’t incorporate Mexican flavors. I caramelized a chopped onion in some olive oil, then when they were almost done I threw in some diced fresh rosemary (left over from some soup I made last week – not sure if it got captured on a receipt, but it was $1), let that cook for a bit, and then threw in the beans. Let those guys fry for a bit and served over rice – delicious.

Along with that stuff, I made some roasted some brussels sprouts using our usual method, but in the end decided they needed something more. Ended up mixing some sriracha and nayonaise together for a creamy-spicy dressing. Highly recommended.

No photos since we didn’t have time for nice presentation, but it all tasted great. 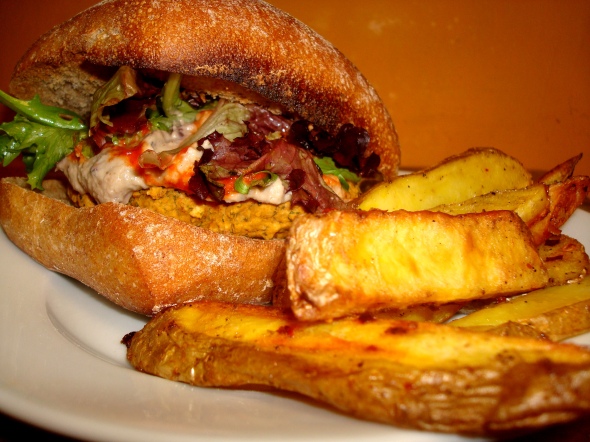 We made these sometime last week after I cooked up a huge batch of chickpeas in our pressure cooker.  Phil had been scouring the web for some chickpea recipes and found these cute chickpea sliders.  I adapted the recipe a bit, as we didn’t have a potato (used breadcrumbs) and instead of an egg white, I used a whole egg and shaped the patties much larger than mini-sliders (which would be great as appetizers).  We topped the patties with Phil’s baba and some lettuce and hot sauce.  Just wanted to share something delicious on a Friday! 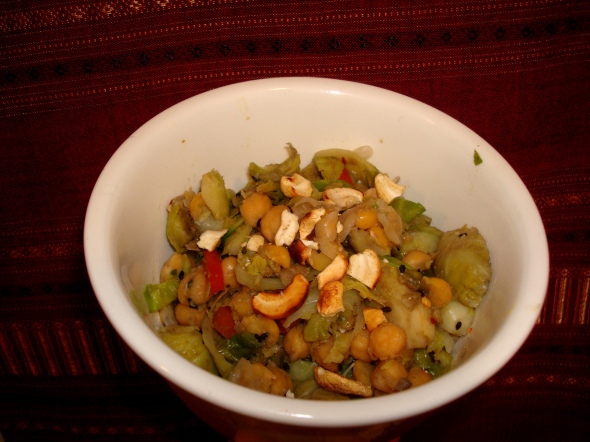 No real recipe for this, which is a bit of a shame because it was delicious.  This was just a simple mix of braised Brussels sprouts that I added some diced red pepper, cooked chickpeas and black sesame seeds towards the end of the cooking time.   Placed on a bit of brown rice and topped with toasted cashews, this made a hearty and healthy dinner.

Ahh, lentil loaf.  A staple of vegetarian cooking.  When done right, it can be delicious; however, it could also be a mushy brick.  We had lentil loaf sandwiches last night and this loaf was good.  It may not look like much, but the outside was crisp and the inside flavorful.  The recipe was a mishmash of things I had in the house and in the fridge (namely some french lentil soup that we didn’t want to eat anymore and leftover brown rice from Sunday).