Our Chinese 5 Pepper plant has produced way too many peppers for us to actually eat, so we decided to try making some hot sauce.  This sauce is really hot, no joke.  I guess it’s the peppers?  They’re small, but pack quite a punch heatwise.  We followed this easy recipe and just bottled today!  This hot sauce will be bottled and given to some of my favorite chili aficionados.  It is EXTREMELY HOT. 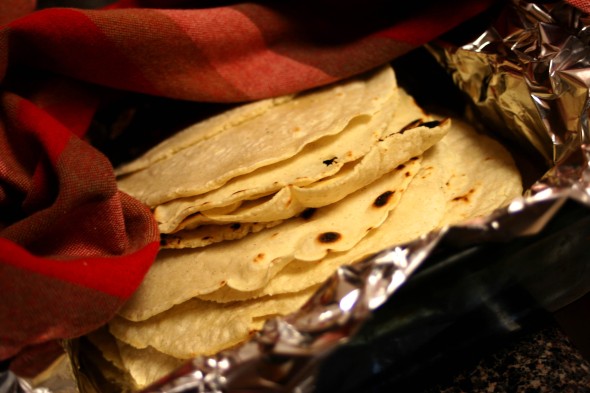 Do to the generosity of a co-worker, I came into a tortilla press. This cinched it – I MUST make tortillas. I have a dirty little secret when it comes to things I know that I’ll need, but also know that it is more expensive in the Coop is that I troll supermarket circulars. For the corn tortillas, I knew I needed masa harina and the only version the Coop sells is Bob’s Red Mill (which is great, but I can’t spend $4 on a small bag). So I went online and looked at all of the supermarkets nearby to see if any of them had a sale on masa harina and our Pioneer Supermarket had a huge bag for $2.50! Counting on that on our weekly budget, we were looking to come in at just $30. However, no matter how hard you plan, sometimes people buy up all the masa harina and your stuck with getting a non-sale version. So we’re over budget, by a $1. We managed to also buy more nopales, the masa harina and a can of chipotle peppers. Even so, this bag of masa will last us a long time and make many delicious tortillas.

Back to the real concern – homemade corn tortillas! I used the recipe right off the back of the masa harina package (we used Maseca – their site actually has some amazing looking recipes) and utilized my trusty stand mixer to do the work. As recommended by a number of blogs, I let the dough sit, covered, for about a half an hour. The actual making of the tortillas was a breeze. It helps if you have two people – one to make the tortillas and one to cook them. Phil and I became a well-oiled tortilla making machine at one point. Served warm with a variety of rice, beans, salsa and other toppings, these were amazing and extremely cost effective.

You can make them without a tortilla press (use a heavy cutting board and a flat dish covered with wax paper and then a rolling pin to thin out the dough), but I highly recommend buying one if you see it for cheap – it makes a world of difference.

This is much easier with two people!  One person presses the tortillas and the other can use 2 skillets and keep those babies moving!

Making your own yogurt really isn’t that difficult.  There has been a lot of posts out in the food blog world about making your own and, of course, Mark Bittman has a great bit in his How to Cook Everything Vegetarian. I used the basics from 101 Cookbooks and have been making my own for a while.  Phil posted a pic of the homemade yogurt already, but I thought I would just write out the process and also how to strain yogurt to make Greek-style yogurt. 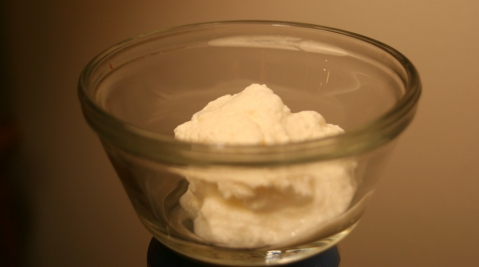 Good Things to Have:

Pour the milk into a microwavable glass bowl.  Microwave for 8 minutes.  You don’t want the milk the boil, but it needs to heat up enough to kill any remaining bacteria.  I usually heat it between 180-185F, which is about 8 minutes in the microwave.  Alternatively, use the double boiler method and stand over the milk and stir it constantly so that it doesn’t scorch.

Take out the bowl of milk and let it hang out until it hits 110-112F.  Don’t let it get under 110!  If you’re in a hurry, put the bowl into an ice water bath (a larger bowl filled with icecubes and cold water) and cool the milk down to 110-112F.  If your Stonyfield yogurt isn’t already on the counter, take it out of the fridge and let it get to room temperature.  Also, preheat your yogurt maker or pour some boiling water in a thermos and keep it hot.

Once the milk hits 110-112F whisk in the yogurt a bit at a time.  Try to make sure the yogurt dissolves in the milk.  Pour into yogurt maker and let sit undisturbed for about 6-8 hours.  The longer the time, the tangier and more solid the yogurt.  *If you’re using a thermos,  empty out the boiled water, shake it vigorously to dry out a bit, add the yogurt mixture and cap tightly.  Wrap in a blanket and keep in a warm, undisturbed place overnight.

The next morning, you should have yogurt!  It might look weird, lots of liquid on top, kinda grainy and smell tangy, but that’s okay!  Stir it all up and put it in a container and leave it in the fridge for a few hours.  It should thicken up.

The yogurt will be less thick than most commercial yogurts because there is no added pectin or other things to solidify it.  I usually make the yogurt, take two tablespoons out to start my next batch (so you don’t have to go out and buy more yogurt!), and strain the remaining yogurt into a thicker yogurt.

How Do I Strain Yogurt?

Easy.  You can use a cheese cloth, coffee filter or some paper towels.  Line a seive with one of the three items I mentioned in the last sentence.  Place seive over another bowl.  Pour yogurt into your lined seive.  Cover with plastic wrap or a damp paper towel or coffee filter.  Leave in fridge for a few hours and up to overnight.  The longer you strain it, the more dense it becomes and forms a type of yogurt “cheese” that you can combine with herbs and use as cream cheese.  I have one of those coffee filters you don’t need a liner for, so I usually use it to strain the yogurt instead of using up paper products, but whatever works!

*I’ve never tried this thermos business, but after reading a bunch of blogs, it appears to work.  For more ideas on how to keep yogurt incubated for the right amount of time and a much more detailed tutorial, go here.