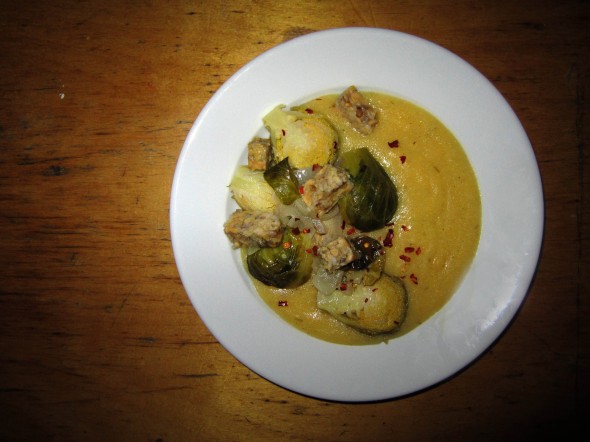 Despite the somewhat fancy-sounding name, this was a very easy dinner to put together. The tempeh and veggies could be left alone in the oven for most of the cooking time and the polenta took all of 5 minutes at the end.

1. Preheat the oven to 350
2. Put the sprouts, onion, and tempeh in an oven-safe dish with a cover. Pour the broth over the mixture and then season with salt, pepper, and lemon juice. Cover and cook for 15 minutes. Uncover, stir, and cook uncovered for another 5 to 10 minutes, ensuring that the sprouts are tender, but not mushy.
3. While the sprouts, etc. are finishing, cook the polenta, seasoning it with salt, pepper, and rosemary.
4. Serve it all together with a sprinkle of crushed red pepper on top.

Or Else You Can’t Have Any Dessert 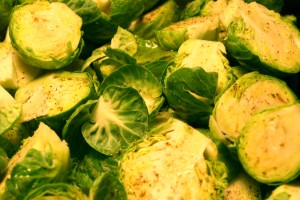 Preheat the oven to 350. Take the sprouts, cut the hard stem ends off, then cut them in half lengthwise. Put them all into a casserole dish. Cut the butter into 1/4″ cubes, and distribute them among the sprouts. Dust with salt and pepper, then put them in the oven and cook them for about 30 minutes, stirring halfway through. If you prefer your sprouts on the dry side, cook them uncovered. Or cook ’em covered if you’re feeling saucy. 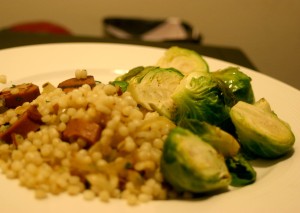 Sprouts pictured here with an improvised cous cous and veggie dog casserole with caramelized onions and toasted fennel seeds. Equally appropriate with a bottle of Rioja and a Basil Hayden’s on the rocks.