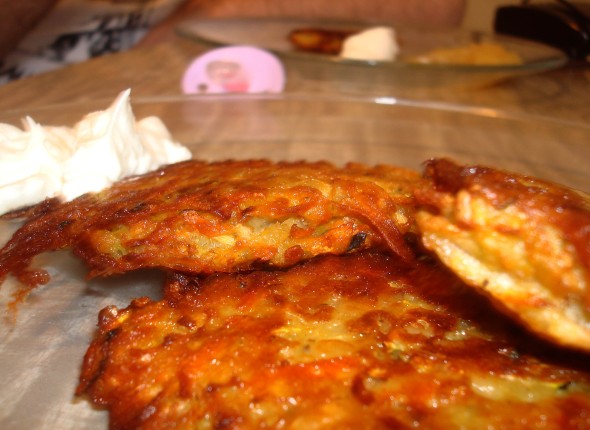 Tina and I were both out of state last weekend (though in different states) – thus the lack of posting. I was in Oklahoma visiting with some friends and their new baby. While we were there, we had these terrific veggie pancakes for breakfast. The method is pretty similar to the latke recipe we posted during Hannukah, but rather than just potato an onion, this one also included shredded zucchini and carrot, and required a bit more flour (about 1/4 cup as I recall). We also left the shredded veggies to sit a while and then pressed out the liquid to make them hold together better. Much like out latkes, these pancakes were thoroughly fried – though this time in peanut oil, which was tasty.

This dish was inspired by a taco recipe from the NYT’s.  Since it was WAY too hot to make homemade tortillas for the actual tacos, we had the mixture over a bed of brown rice, some leftover zucchini salad and sliced avocado.  I bet it’s real tasty as a taco, but the flavors stand out regardless.  Use the fresh corn, as suggested, because it really make for a delightfully fresh dish.  I followed the above recipe to the letter, but added some white beans at the end for added protein.