You Say Casserole, I Say…Casserole As Well 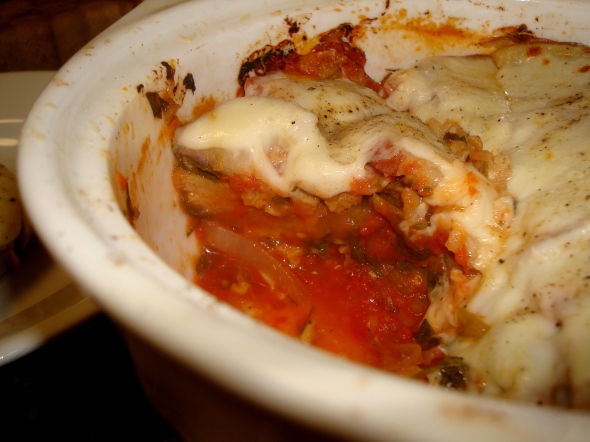 Tomato tomahto potato potahto casserole. Easy as pie if you have:

Preheat the oven to 350. Grease the inside of a casserole dish with a little olive oil and then just layer in the potato, onion, sauce, and mozzarella. Somewhere in each tier, sprinkle in a modest amount of salt and pepper. I was only able to fit two layers of each into our little dish before running out of both room and ingredients, but that was fine. Top with some more sauce if it wasn’t already your top layer and cook covered for 45 minutes or so, allowing the potatoes to become very tender. Then add one more layer of mozzarella, grate some pecorino on top, and maybe grind some fresh pepper on there as well. Cook uncovered for another 5 minutes or so. You could also stick in under the broiler for a minute or two to really toast the top layer of cheese.

Another idea might be to use slices of fresh tomato instead of the sauce. Except maybe on top.

We’ve got a bumper crop of tomatoes from the garden and were given a bunch by a co-worker who loves to garden and hates to cook.  Last night’s dinner featured a variation on a socca, white bean and couscous patties (leftovers)  with tomato sauce, roasted cherry tomatoes and baby eggplants and a raw green salad (garden bounty). 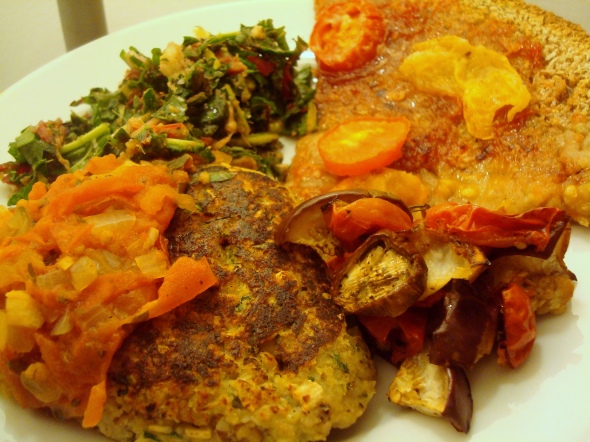 After starting to saute some veggies (onion, Italian frying peppers, and tomato) to serve over barley, I realized the meal was a little short on protein. I had just added a giant heirloom tomato (from a colleague’s garden) to the pan and there was a good quarter-inch of juice in the bottom of the pan. I just threw some eggs in on top, covered the pan, and let it cook for a bit. Ended up with some partially tomato-juice-poached, partially fried eggs with plenty of tasty veggies.

Not sure if this resembles any common recipe, but it was tasty for sure.

Yet another hot day in New York. Inspired by a fried who brought some gazpacho to a picnic last Sunday, we decided to make out own for dinner. Tomatoes (from the garden), half a peeled cucumber, half a red pepper, half an onion, a remaining bit of jalapeno, a semi-stale piece of pita, a last bit of cilantro, and a handful of cashews and almonds – threw it all in the food processor and there you have it. Or there you WOULD have it, if we hadn’t gone the extra mile and added some fresh, raw kernels of some amazing sweet corn that Tina found for super-cheap at the farmers market during closing time. Also, some chunks of our one remaining tomato.

Look, gazpacho is never going to be the most photogenic soup. But this guys was real tasty and (most importantly) cool.

One more thing: we had a friend over for dinner last night and I promised her I’d showcase her contribution. She’s a true gourmand.

Tomato Tart (or how to deal with a lot of tomatoes)

My lovely boss loves to garden and apparently has a lot of land upstate in which to do so.  He’s been bringing me eggplant, peppers and TONS of tomatoes.  I’ve made a few batches of delicious tomato jam, and was looking for something a little different.  These tomatoes are gorgeous – ripe, big and super heirloom-looking.  I looked into A Year in a Vegetarian Kitchen and on the back cover is a photo of an amazing tomato tart.  Read the recipe and I had all the ingredients!  I started the dough at 11pm and Phil thought I was nuts, but it needs some fridge time.  Totally worth it.

Rosemary Tomato Tart (adapted from A Year in a Vegetarian Kitchen) 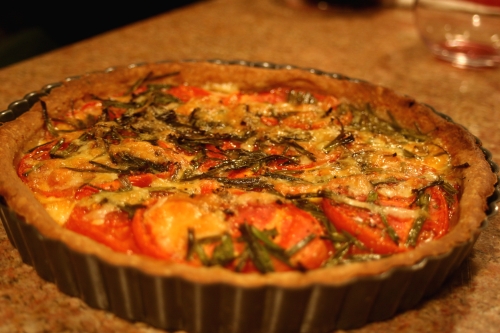 To Do:
The night before, place flour, rosemary and salt in food processor and blend well.  Add the bits of butter and pulse until pea sized crumbles form.  Add ice cold water, one tablespoon at a time, until the dough begins to form a rough ball (do not add too much water 5 tablespoons should do it with whole wheat flour).  Knead dough on a floured surface into a smooth ball.  Flatten into a five inch disc, cover in plastic wrap and refridgerate for at least an hour and up to two days.

The next day, core and slice your tomatoes thin.  Place on a plate lined with a paper towel and put a paper towel on top of the tomatoes (this dries out the tomatoes a bit and gets rid of some of the seeds.  Preheat the oven to 375F and roll out the dough on a floured surface into a 12″ disc.  Place over a fluted tart pan and press the dough to the bottom.  Use rolling pin to cut off excess dough from the sides of the pan and save (you can make another little tart or crostada with this).  Prick the crust with a fork and scatter the cheese on top of it.  Remove paper towels from tomatoes and place tomatoes on top of the cheese in overlapping circles.  Scatter roughly chopped chives on top of the whole tart and top with salt and pepper.  Drizzle with olive oil and bake for 30-45 minutes or until the crust pulls away from the edges of the pan.  Cool and serve.

It can serve four as a side.  The whole thing might just be eaten up quickly though. 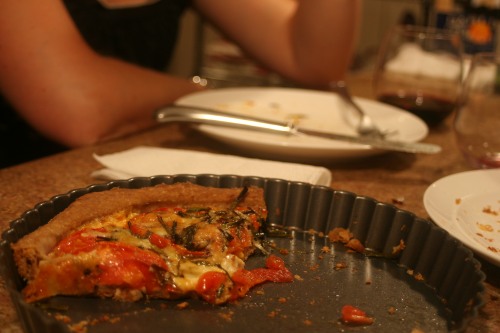