Thanks to my brother, I have a Saveur subscription.  Most of the time the features are all about meat, so I rarely partake, but the baking sections are usually amazing.  The latest issue focuses on Southern cakes and the cover photo of a slice of red velvet cake made me drool.  With my sister over on Saturday, we decided to have a little fun.  While not super frugal, one whole cake is pretty much the cost of a single slice at a restaurant so…BAKE!  We made a coconut cake on Saturday and a red velvet on Sunday…highly recommended.  The recipes were followed to the letter—except I recommending halving the frosting recipe.  There was way too much frosting for the coconut cake and I ended up halving the frosting for the red velvet with a lot left over, so unless you really want to load up your cake, half it!  Also, follow the 4 cake baking tips they offer – I think they made a huge difference. 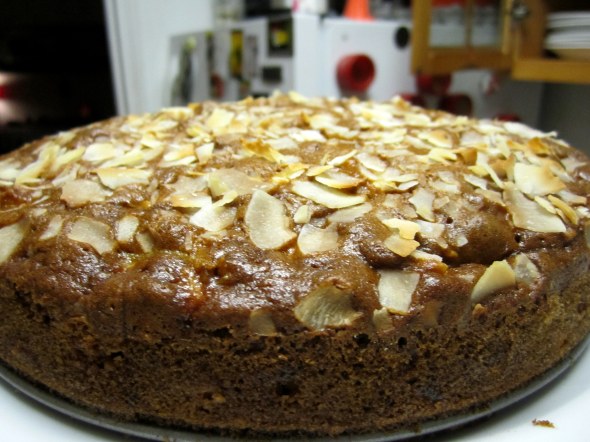 Intrigued after reading this article, I decided to search the web for a few of Chef Ottolenghi’s recipes to try out before deciding to buy his latest cookbook.  I found his Apple and Olive Oil Cake via More Than Burnt Toast and made it the other night – DELICIOUS!  Thank you internet, I think I may buy his book now.

I made a few changes to the recipe – namely I just used 3 whole eggs instead of the egg white route and used homemade vanilla extract instead of a vanilla bean.  Maybe the cake would have been fluffier with the egg whites, but it rose well enough for me.  I also only used 2 large granny smith apples and felt that was enough with the amount of batter.  The topping was just some coconut I sprinkled on before popping it into the oven and it only needed an hour of baking time.  The cake is moist and light – surprising because of the apple pieces.  Perfect with tea or even for breakfast!

Thank you King Arthur Flour for this amazingly moist, easy and delicious cake!

I made this in celebration of Phil’s return from a work retreat and it is super simple.  The King Arthur’s Baker’s Banter Blog runs through the recipe, step-by-step, so head over there for great instruction.

I also whipped up a peanut butter frosting – a bit of peanut butter, some powdered sugar and coffee – whipped until smooth, spread on top and then saved for later use.