Veggie dawgs and pasta salad. We just flew back from a wedding in Chicago and boy is our grill tired.

Of all the prepared foods that we don’t buy anymore, one of the things I miss the least is store-bought salad dressing. Making it yourself takes no time at all and it means you can experiment with all different mixtures. Yesterday, I accidentally came across what may be the best home-made salad dressing I’ve ever made. It requires:

Don’t know the measurements – like I said, you just have to use intuition, taste, and a little luck. But if you balance it out just right and blend it up, you will have yourself some very serious salad dressing indeed. 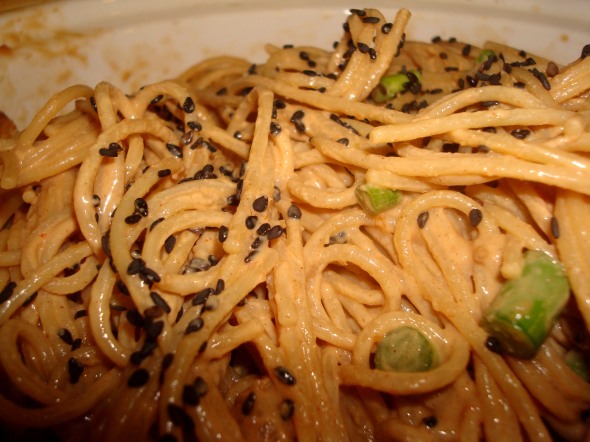 Things in the garden plot are really starting to shoot up. Pretty soon we’ll have a whole mess of kale, chard, beets, and purple pole beans. For the time being, however, the garlic cloves we planted last fall have just produced big, beautiful scapes. I harvested a few of them last night and we threw them in (fine chopped) into some peanut noodles.

The peanut sauce was homemade, and mostly leftover from a dinner last week – we had to add some extra water and vinegar to loosen it up. After mixing the sauce into some whole wheat noodles, we just dumped in the scapes along with some chopped up veggie chic patties (not that frugal) and black sesame seeds.

Back to the Land

Realized recently that we haven’t really written at all about getting back to our community garden plot with the start of this year’s growing season.

I just spent the early afternoon doing some general plot maintenance and planing a couple of tomato seedlings. My reward was a big bunch of mint that I’m going to make into iced mint tea later today. I also got a bunch of motherwort, which has been growing like crazy in one of the common areas. Nobody had been picking it – partially because a lot of us didn’t know what to do with it – but from the link above, it seems like a tea infusion could be used for a whole range of medicinal purposes. Anybody have any experience with this plant?

Anyway, in our own plot we’ve got big, healthy garlic plants from cloves we planted last fall, as well as a whole lot of beets, chard, and kale. We’ve also got a couple of hearty-looking purple pole bean seedlings. Hopefully we should start doing some harvesting within the next few weeks.

We also need to figure out what to put in the space where our radishes were. I guess we could put in more radishes, but it seems like they just end up being varmint bait. 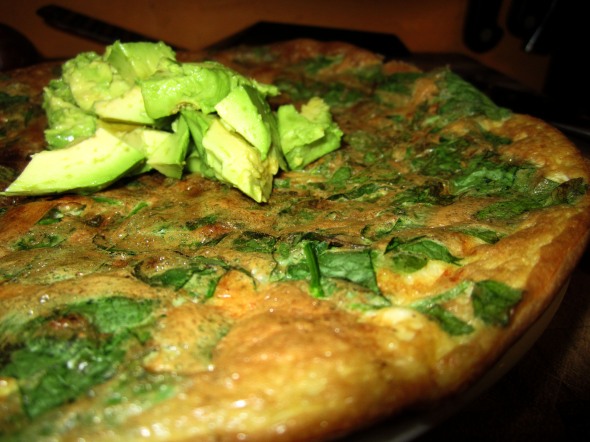 Though we haven’t been posting about it much, we have in fact been pretty busy at the Flatbush Community Garden over the last several weeks. We sowed our plot with beets, kale, chard, purple pole beans, and radishes. Of these, the radishes are the quickest to reach maturity and after over a week of steady rain in Brooklyn, they were in perfect shape for harvesting yesterday. Or rather, they would have been, except that once again, our radish crop has been ravaged by some varmint. Out of about a dozen radishes, all but one suffered substantial chew damage. We cut the clean bits out and had those in salad, but we really only got about three radishes worth.

However, whatever it was that ate the radishes was picky enough to leave the radish greens totally untouched, so we were able to put those into a frittata with a bit of feta. It was cooked in a cast iron skillet, first on the stovetop and then under the broiler for a couple of minutes. Topped with some chopped avocado, it made a nice, light dinner with some bread and salad.

Put this impromptu veggie meatloaf together the other night. I took a couple cups of cooked lentils, some rehydrated dried mushrooms (diced), chopped carrots and onion, and a couple of eggs and mixed them up with salt and pepper in a loaf dish with salt and pepper. Deciding it needed a bit more loafitude, I also put in about half a cup of flour. Baked in uncovered on 350 for about half an hour. For the last 10 minutes, I covered the top in a thin layer of ketchup to get that nice tomatoey crust.

Another Receipt from Last Week

Spent the remaining bit of last week’s budget at the coop – a little under $13. For that I got us: 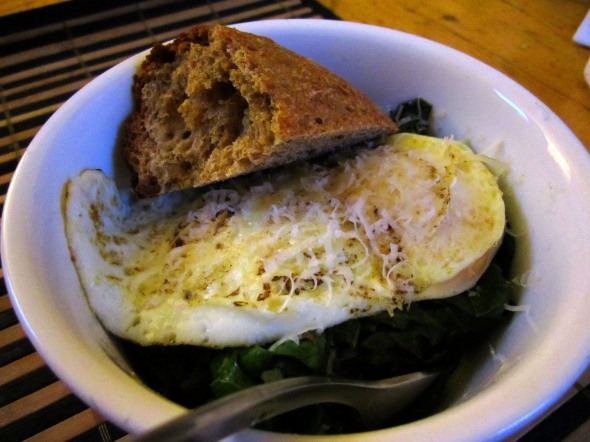 Trying to cook our way into spring with some light, fresh veggies. What we have here is spaghetti with some barely-sauteed collard greens. I julienned the greens while some diced onion and garlic cooked in butter, I added the greens and used tongs to flip them around and keep them from getting too floppy. When they were lightly cooked but still firm, I transferred them into a bowl and put them in a warm oven while i used the same pan to cook a couple of eggs over easy. The greens and egg both went on top of spaghetti with some fresh grated parmesan.

Nothing complex here – black eyed peas and sliced scallions mixed with a dressing of tahini, lemon, a little vinegar, salt, pepper, and a big dash of zataar. Served cool with carrot for garnish.

A real recipe post tomorrow for sure…it’s been a hectic week. For now, another receipt. In combination with stuff lingering in the fridge/pantry from last week, this should take care of us for most of the current week.

Last night we roasted the green beans and had them with the rice blend Tina got at Trader Joe’s and some homemade bachelor burgers out of lentils and white beans. I roasted the brussels sprouts tonight to stretch out the remainder of those leftovers, so not a lot of exciting recipes there.